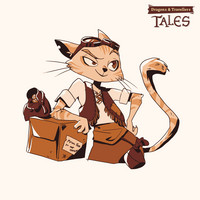 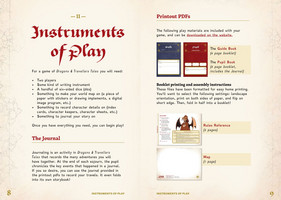 Hello, world! It has been a long time since the publication of my last game, but I'm excited to announce that a project I have been working on since its original design all the way back in 2018 is finally just about ready to publish and will be released on September 15, 2022!

So what is Dragons & Travellers Tales?

Well, it's something unusual, but I'll try to explain it by way of how I got here.

I've always loved games that allow you to role play from the perspective of multiple members of an ensemble cast of characters. This goes all the way back to playing games like The 7th Saga on Super Nintendo in the 90s, but especially the SaGa series of RPGs by Akitoshi Kawazu and his collaborators at Square Enix. I also took a lot of inspiration from the SaGa-inspired Square Enix game Octopath Traveller, which many of you no doubt played on the Nintendo Switch. Kawazu's games are maybe best known for their strange and arcane mechanics, but what I wanted to bring to life in a tabletop game was the idea of exploring a fictional world through the perspective of multiple protagonists and their relationships. As I wrote on the back cover of the game: "The more you play, the more connected the characters become with each other and with their surrounding setting, growing together into a rich universe of imagination." Nice!

I was also very inspired by the idea of ryuujin, or what I translate as "dragonfolk" in Dragons & Travellers Tales, who help to create the world by helping the protagonists through their adventures in the Japanese tabletop RPG Ryuutama by Atsuhiro Okada. First of all, because I've always loved dragons, but secondly because putting the "game master" in a specific character role that is there to provide a nurturing experience was very exciting to me, coming from other more adversarial tabletop RPGs. I wanted to make a game that was about intimacy, personal growth, mentorship, group learning, and collaboration, so the idea of the "dragonfolk" really got the creative juices flowing! This lead me to create a two-player "duet" game that has a lot of characters, but is an ongoing conversation between just two people. You might be skeptical of doing a campaign-length game in this duet format, but I can assure you it's a great time and will teach you a lot.

Finally, I was inspired to do a radical hack of the Forged in the Dark (FitD) game system first seen in John Harper's game Blades in the Dark. Some of you might know me for my massively popular Let's Learn Blades in the Dark series of tutorial videos on YouTube, which got me very well acquainted with that game system in the early days after its release, and I've done hundreds upon hundreds of hours of campaigning in Austin Ramsay's Beam Saber, another tabletop RPG based on the FitD system. With all that experience, I got close enough to the system to see how I could make it something new.

A lot of FitD games have chosen to go maximalist and sprawl out, or add some genre modifications on top the system found in Blades, but I wanted to come in and do some drastic surgery. You might have already played my musical heist RPG The Wind Began to Howl, which did a bit of this, but Dragons & Travellers' Tales hacks the system on another level. It's a FitD game that has no action ratings, and it rarely ever uses action rolls...but I'll get to that in another blog post! For now, just expect it to turn the Forged system on its head!

Hopefully that helps get you interested in the general idea of Dragons and Travellers Tales. If you want the short and sweet description check out the main game page, and if you want more details keep watching this space, since I'll be posting more dev blogs that explain the way it works leading up to the release date!

See you soon sojourners—add the game to your collection, and don't forget September 15!